Just in case you didn't see these...

Hey there everybody!  Thanks for the response we've been getting to the store so far.  We're still trying to get the word out about our name and location change, so pass the info on to anyone you think would be interested.  We've also been busy getting the store running in an orderly fashion, and there have been some challenges, so we haven't been able to keep the blog as regular as we want it to be yet.  Here are some things that have gone on Facebook & Twitter that you may have missed, and once again, thanks for the support!  Record Store Day in particular was fantastic! 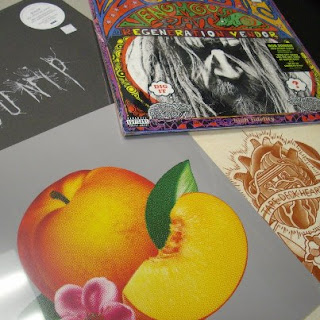 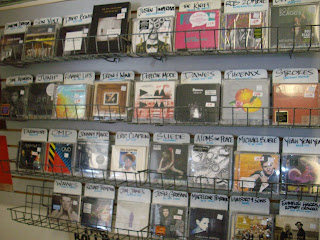 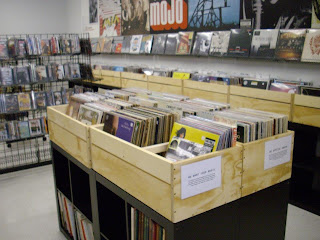 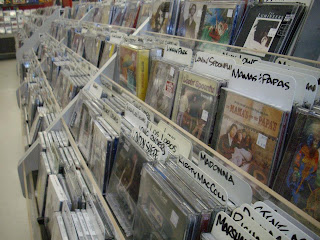 Posted by Jason @ Electric Avenue at 5:38 PM No comments:

You may have already seen the info on Facebook or Twitter, but we opened for business yesterday.  It was what we like to call a "soft opening".  Basically, we needed to learn how to operate the "new" computer system, which was actually our "old" computer system in the sense that it is the system we used when we were Rainbow Records 16 YEARS ago, now updated (of course).  There were certain things we wanted to make sure we could do before we started helping you.  Now that those things have generally been taken care of, our first couple days were very positive.

Day 1 was extraordinarily busy, as word got around through some close contacts and former CCBMC employees, while Day 2 was less busy, but gave us a chance to catch up on some mounting paperwork, reflect with some customers on what has transpired, and prepare for Record Store Day 2013.  If you are unaware, Record Store Day is this Saturday, April 21.  We will open at 9am.  Record Store Day falls on the third Saturday of each April, and is a day to celebrate independent record stores by letting them sell exclusive recordings (mostly on vinyl) that cannot be found at mass merchants or online retailers (there is a secondary one now on Black Friday in November).  We spent much of today receiving fantastic RSD products, as well as some great new LPs you may want to add to your collection.  Call us at our new phone number, 610-692-3600 if you have a specific inquiry (the list can be found here): http://www.recordstoreday.com/SpecialReleases

As for Electric Avenue, we are so pleased with an article that ran in the West Chester Daily Local yesterday on the cover of the business section.  You can access that information here: http://www.dailylocal.com/article/20130417/FINANCE01/130419588/music-lovers-opening-new-store-in-w-chester

We will continue discussing music and what's going on in the music world here, and we hope you join in with your thoughts.  Right now, we are so blessed and grateful that we have special people in our lives who have helped us achieve the beginning of a dream through their investments and hard work.  It's time Chester County had another music store that people will cherish and appreciate, and we're honored to be a part of that landscape.


Posted by Jason @ Electric Avenue at 8:11 PM No comments:

What did we miss?

Opening day is coming soon (could it be April 17th?), and I thought it would be a good time to talk about some of the great new music we've already missed discussing with you and selling in the first couple months of the year.  2013 was off to a rather slow start (fortunately for us), but there were a couple hot titles that people seemed to be interested in back in January, specifically Yo La Tengo with Fade, (their 13th(!) album), and Foxygen's We Are the 21st Century Ambassadors of Peace.  Both were critically acclaimed, and seemed to keep people going through the beginnning of a very bleak winter here.

A personal favorite came at the end of January--that being Tegan & Sara's Heartthrob.  I have to admit that I never really gave the female duo much praise in the past, but here they hit absolute gold with a new producer, Greg Kurstin (famous for working with Kylie Minogue, Kelly Clarkson, Lily Allen, and as one half of The Bird & The Bee).  Kurstin has given the girls a pop sheen that may have put off some of their traditional fans, but the move also invited a lot of new ones into their world, opening up their sound and giving them some of their biggest sales figures.  If you like strongly written and produced pop songs with a bit of a Fleetwood Mac vibe here & there, make sure to check it out.  Here's one of the best tracks, the pop ballad "I Was a Fool":

Other truly great records have been released, such as the aforementioned David Bowie title, The Next Day, the haunting Push the Sky Away from Nick Cave & the Bad Seeds (which even includes a song namechecking Miley Cyrus and Hannah Montana!), and London Suede's first new record in a decade, Bloodsports.  All three albums are amazing British rock records that will probably be lurking among my favorites of the year once 2013 closes.

If you like Swedish indie pop artists like Peter, Bjorn & John or Lykke Li, or even more US-based quirky mainstream pop like Foster the People, you should probably check out the latest entries from Shout Out Louds (the infectious Optica), Mary Onettes (Hit the Waves), or Gold Fields (Black Sun).  If you like 80's alternative like the Cure, XTC, or Echo & the Bunnymen, these three records have a lot of charm, and excel on interesting arrangements and catchy songs that don't come across as too typical or pedestrian.  Shout Out Louds in particular found a great sound by letting go and having fun.

Also of note is Hershey, PA's own Ocean Blue, a band that first appeared in the late 80's as an American answer to British shoegaze pop, but never really took off in a big way. They've taken long breaks between records, but now return with one of their best, and their first in 14 years, Ultramarine.  They're really not much like My Bloody Valenting, but if you liked Cocteau Twins or The Smiths, you should really hear Ocean Blue.

Other to investigate:  Depeche Mode's Delta Machine, Johnny Marr's Messenger,  or Rhye's wonderful Woman (if you like blue-eyed soul).  Also on the blue-eyed soul tip is Jessie Ware's Devotion, a veritable masterclass of how to do modern R&B correctly.  Of course, if you listen to WXPN, you've been hearing great stuff from the Strokes, Jim James, James Hunter, Boz Scaggs, Phosphorescent, Richard Thompson, Eric Clapton, and more.  April continues to be big, with an avalanche of new titles coming our way.  Hopefully this gets you thinking about making a list (if you don't already have one!), and maybe you'll find something you may have missed (even Andrea Bocelli, Josh Groban, and Justin Timberlake put out full length records!).

Twelve weeks may not seem like a long time to be away, but it sure does when you look at all the things we've missed out on.  We cannot wait to be back in business, and it seems closer than ever (could it be the middle of next week?)!  Let's talk music soon!

Posted by Jason @ Electric Avenue at 9:04 PM No comments: