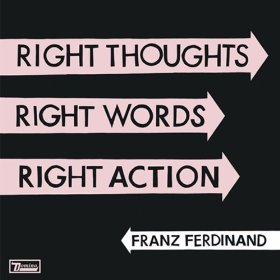 Four years in the making, Franz Ferdinand have finally returned with their fourth album, Right Thoughts, Right Words, Right Action.  At the dawn of the millennium, much of what was considered "Britpop" was either changing (Oasis, Suede) or disbanding (Pulp, Blur, Suede).  FF were at the forefront of a new wave of punchy and groovy guitar rock with indie cred with a slighty punk edge (they would be snapped up by Sony quickly).  After a minor breakthrough in the US with their debut and the hit single "Take Me Out", they quickly had loads of competition and imitators in other bands like Kaiser Chiefs and the Fratellis.  Their biggest competition came in younger form a couple years later as Arctic Monkeys took the rockier edges of their sound and amped them up with darker lyrics.  FF spent their next couple albums trying to stay in the game, but struggled a bit by album number three while looking to synths for new sounds and rhythms to add to the mix.  They recorded the album twice, and while it was a good record, it lost a bit of their energy in the process.

Back with the indie label, RTRWRA does a bit of restoration in that department, as the songs bounce along with lighter feet than recent offerings, and much of the sonic structure shows a band very confident in their abilities and open to new influences without letting them overtake the party.  The opening title track is a case in point, where the rhythm gets a little funkier than in the past, but the song by way of repetition becomes completely embedded in your skull after one hearing.  Other songs like "Evil Eye" sort of reference the sound that FF came up with on their debut, albeit with a bit more of a haunted vibe.  "Fresh Strawberries" is one of the most upbeat rock ballads they've come up with, while "Bullet" and "Treason! Animals." are just the type of quirk and cheek we've come to expect from them.  It all ends with the spooky ballad, "Goodbye Lovers and Friends", leaving one to wonder if it is an epitaph to the album, this particular style of FF, or the band themselves.  It's just one reason we keep coming back to them, as their lyrical ambiguity always keeps us on our toes.  Every time we wait three or four years we are reminded why we like them, but wonder why they can't keep the momentum more regular.  In any case, Right Thoughts, Right Words, Right Action is another enjoyable album in their repetoire, and hopefully not the end.

Posted by Jason @ Electric Avenue at 12:17 PM No comments: 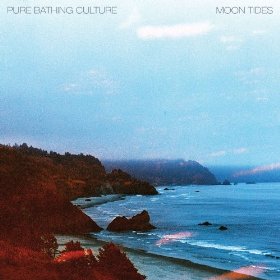 Once in a while a new sound strikes you as reminiscent of something you have heard before, yet still retains an originality to distinguish itself from previous releases.  That tends to be the case with the lush new release from New Jersey-by-way-of-Portland's Pure Bathing Culture, Moon Tides.  If you are into bands like the Shins, Beach House, or Cocteau Twins, you really should take note.  Recorded in a mere ten days at Richard Swift's (Shins) studio, the duo features Sarah Vesprille's beguiling vocals, Daniel Hindman's chiming guitars, and while less histrionic than Liz Fraser's gliding bird calls of yore, there is something a bit sweeter and uplifting compared to Cocteau's or Beach House's darker material.  The difference is very apparent on songs like the spinning opener, "Pendulum" and the melodically poppy "Only Lonely Lovers".  "Scotty" goes one further by (strangely) quoting a Benny Mardones hit of decades ago, "Into the Night", and works it seamlessly into the song.  These tend to be the more grounded songs on the record, while tracks like the Cocteau-esque "Even Greener" has more ethereal guitar work, and closer "Temples of the Moon" is akin to some of that parent band's darker closing album tracks.  Heck, "Twins" may even be an indirect tribute of sorts.  What sets this apart is A)The fact that their vocals are in decipherable English, and 2)There is a warmer, more earthly connection than in much Cocteau work, which puts it more in the aforementioned Beach House territory.  With that being said, if you are looking for a lazy and gorgeous record to wind up your summer daze and you like the bands I've mentioned, Moon Tides might just do the trick.  "Scotty" is streaming below:

Posted by Jason @ Electric Avenue at 7:18 PM No comments:

John Cale is most known for his work as a member of the Velvet Underground and producer who has worked with stars such as Patti Smith and Brian Eno.  A classically trained musician, once Cale no longer was part of VU, he began a solo career with the LP Vintage Violence, a sort-of homage to Americana coming from a British born artist.  This was followed by his most famous album, Paris 1919, which put him alongside unique songwriters of the day like Randy Newman.  Meanwhile, Cale had been producing stark records by former Velvets singer Nico and edgy legends like the Stooges and the Modern Lovers.  That sound finally spilled over into his own work on Fear, his first for Island Records in 1974, a year on from the previous LP. 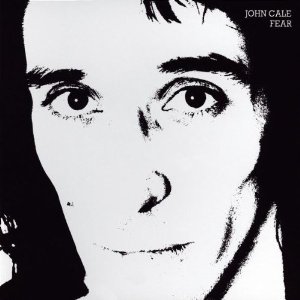 Fear opens with the chugging title track in which Cale repeats "Fear is a man's best friend" like a mantra.  It's a statement of purpose that will carry Cale through all of his Island albums which follow.  Cale really lets go toward the end of the song where he begins shrieking over and over, showing a darker side that will also surface a bit in Patti Smith's Horses, which he was working on around the same time.  "Buffalo Ballet" follows as a bit of a throwback to his more western glancing material.  "Barracuda" (not the Heart song) and "Emily" follow with more of a quirky Roxy Music vibe (Phil Manzanera, Andy MacKay, and Brian Eno all guest on this album, as does Richard Thompson).  "Ship of Fools" with it's cascading piano melody is one of the cornerstones of the album, and predates Elvis Costello's Imperial Bedroom by a few years.

Side 2 (or part 2 if you have the CD), begins with the 8-minute rocker, "Gun", a song featuring an amazing dual guitar solo by Manzanera being shadowed (or messed up) on synthesizer by Eno. Eno and Cale would continue their working relationship on Cale's next couple of releases, and they would record the great collaborative duet album Wrong Way Up in 1990, the same year Cale would reunite with ex-Velvets Lou Reed for another collaborative album, Songs for Drella.  (Siouxsie and the Banshees liked "Gun" so much, they covered it on their Through the Looking Glass covers album, and then asked Cale to produce parts of their final studio record from 1994, The Rapture.)  The Beach Boys-esque lark "The Man Who Couldn't Afford to Orgy" comes next to lighten the mood considerably, followed by the stunning "You Know More Than I Know", another overlooked gem.  "Mommama Scuba" closes the album on a dark glam-rock note.

Fear was a turning point for Cale, and while struggles with substances have been somewhat documented, it is a leap of confidence into something new for him, becoming as interesting as the artists he was producing.  The next two Island albums, Slow Dazzle and Helen of Troy follow suit with the template Fear sets out with.  It's a remarkable body of work from an artist who tends to get marginalised compared to other 70's luminaries of the genre such as Bowie and Talking Heads.  Now in his 70's, Cale continues to experiment and grow as an artist, releasing last year's interesting Shifty Adventures in Nookie Wood LP and the Extra Playful EP.  He refuses to retire or rest on his laurels, and Fear is a fantastic and somewhat overlooked rock record.

All of Cale's three Island solo releases plus his collaboration with classical artist Terry Riley (Church of Anthrax) have been recently remastered and reissued by the Culture Factory label.  Here's a short, fan-made version of a series of comic book covers to the song "Gun":

Posted by Jason @ Electric Avenue at 7:13 AM No comments: