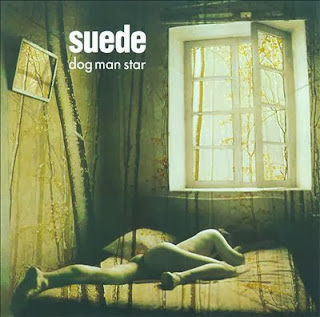 Suede always seem to get the short end of the stick.  Along with Pulp, they were one of the bands that shifted the early 90's Britpop revival into full gear, a dubious distinction which they themselves might not be too keen on, and would pave the way for mega-bands like Oasis and Blur.  Fusing influences such as The Smiths and David Bowie (and a bit of Pink Floyd here), Suede were unique in that they had a distinct rock edge, while also knowing when a sparse piano ballad would do the trick.  With an enigmatic and charismatic front man, Brett Anderson displayed his individual talent by not only writing lyrics containing tales of the downtrodden and dispossessed, but also infusing them with the right amount of sneer, pathos, and vulnerability.  Bernard Butler was his highly talented sideman, a guitarist (and sometime pianist) with extreme talents who has since gone on to big production gigs (Duffy "Rockferry"), and during his later days with Suede as on the making of Dog Man Star, their second LP, suffered from bouts of depression and social ostracism after the recent death of his father.  This combustible combination of band captains led to the demise of Suede MK1 as this album was being completed, and Butler would soon be replaced by newspaper ad respondent and teenage guitar wunderkind, Richard Oakes.  However, before Butler was sent packing, he helped craft the band's sophomore album, not only a fantastic example of what 90's Britpop had the potential of becoming, but also one of this author's favorite records of all time.

The cover image was considered somewhat controversial at the time of release (October 1994), but suits the music perfectly, and is typical Suede, as the ambiguous image of their debut LP featured two androgynous women sharing a passionate kiss.  "Introducing the Band" is an apt way to open the record, showing Suede in a more psych-drone-y way than they've been before or since.  When they released "The Wild Ones" as a single, "Introducing the Band" became a B-side with a 15-minute Brian Eno ambient remix, but here it has more punch, laying out the band's intentions in a couple minutes with some riveting opening lyrics ("Dog man star took a suck on a pill, and stabbed a cerebellum with a curious quill...").  This was followed by the glam-rocking "We Are the Pigs", a song which halted their run of big hit singles in the UK.  Not the best choice for a lead single, British kids just didn't get know what to do with it, and knowing that Butler was out of the band already did not help.  Additionally, the song has a darker political and psychedelic tone than anything from their debut's era, but even Lady Gaga would appreciate the chorus lyrics ("We Are the Pigs, We Are the Swine, We Are the Stars of the Firing Line"), and the song closes with children chanting the words "We'll watch them burn".  "Heroine" really lifts the album up a bit where needed, and reflects the glammier side of Suede with tales of lust and debauchery.  Butler's guitar absolutely cuts through the dense textures and "Heroine" remains one of the albums most rousing moments for it.

"The Wild Ones" follows, and will stand as one of the best songs of the 90's Britpop era.  Opening with Butler's strummed acoustic guitar and Anderson's croon in a lower register, the song gradually builds over five minutes into something magical that closely resembles this era's "Heroes"(Bowie), and probably should have been the lead single.  An elegant ballad with nuances that Oasis could have only hoped to reach, "The Wild Ones" was their second consecutive single not to reach the British top 10, even though the album still managed a UK number three placing.  "Daddy's Speeding" is an atmospheric ballad detailing a reckless drive behind the wheel backed by haunting piano lines and a scuzzy building guitar over five minutes of little-to-no drums, ending with the sound of a car crash.  "The Power" closes the first half, and remains bittersweet for the band as it is the only track not to feature Butler on guitar.  It's a swaying ballad that would not have been out of place on Bowie's Hunky Dory, and it's "lalala" closing refrains let in just a little light from all the sadness, anger, and longing up to this point.

"New Generation" begins Side 2 with something a bit more optimistically pounding and catchy.  It was the third single not to make the top 10 (it peaked at #21 while previous singles both made #18), but by this point the band were on their way to America to promote the album (they never registered with US listeners much, besides the fact they were still fighting name recognition against Maryland folk singer Suede, being forced to operate under the name "The London Suede" to avoid confusion).  The heaviest rocker on the album, "This Hollywood Life", is up next, and with tales of fantastic icons of the silver screen with a super-glam treatment, builds to a massive cliff of a climax.

What follows is what some would consider ballad heavy.  However, if ballads such as these are the stock in trade, they could have written and recorded album after album of them.  That this album does not sag under their weight belies just how strong the arrangements and material sound 20 years later.  "The 2 of Us" is a dark ballad that absolutely haunts, bridging the gap between glam and goth with its deep atmosphere.  Followed by the slightly lighter "Black or Blue", there is still an air of something gone awry, lovers lost to drugs, or something much worse.  The nearly 10-minute "Asphalt World", the centerpiece of the album, manages to hold your attention for the full running time with a prog-rock build containing some of Butler's best guitar work on record, some of Anderson's best singing, and while the band were literally coming apart at the seams, they continued to create some of their most vital and intriguing work.  The album closes with the epic string-drenched "Still Life", one of the best album closers of all time.  A song so good it could never be a radio single, cascades of orchestra mixed with Ed Buller's sometimes eerie production and Anderson's most sensitive singing that  hint at regret and loss.  It's a chilling tearjerker of the highest order.

Fans of Suede know the castoffs from their first two albums which were used as B-sides were generally as good as the album tracks, and most were included on the Sci-Fi Lullabies compilation.  However, Dog Man Star remains the favorite album of most Suede fans, even though it was generally misunderstood at the time it was released.  It is so highly regarded today that it was recently ranked the #31 album of all time by the NME staff of reviewers in England ahead of Paul's Boutique, Abbey Road, and London Calling.  Originally released on indie Nude Records in the UK and Columbia in the US, Edsel Records did a big remaster program on the Suede catalog a couple years ago as triple disc packages, crammed with bonus tracks and a DVD featuring concert footage from each of their five albums up to their extended hiatus after 2002's A New Morning.  This year's Bloodsports saw most of Suede (excepting Butler) reunited to channel some of that magic again, yet Anderson has said he feels they have yet to make their masterpiece.  With albums like Dog Man Star, they may be trying to top it for many years to come.

Posted by Jason @ Electric Avenue at 9:52 PM No comments: